Cooler Master Challenger Series is an Online CSGO competitive event based on a concept conceived by Drag2Death called “CHALLENGE THE MIGHTY KING” or CTMK for short. CTMK is a new concept where a Challenger team is chosen by the community voting system on weekly rotation basis to compete with the top team called the “Mighty King”.

Cooler Master Challenger Series is played between top 8 teams that qualify from an Open Online Qualifier. The Winner of the Open qualifier becomes the “Mighty King” for the first week. Week over week new Challengers emerge to take on the Mighty King. Hence, the Mighty King has to win every Bo3 match that is played weekly to retain the top position throughout.

As long as a team retains its top position they keep on winning cash and other cool prizes from our sponsors on a weekly basis. If the Mighty King loses to a Challenger team, the Mighty King team is taken down and a 4 Weeks Cool-Down is applied. During these 4 weeks, the community cannot vote for this team and will have other teams that can be voted to become new Challengers. Week over week the voting options w.r.t teams becomes narrow so that other teams get a chance to be elected.  The team that wins becomes the new Mighty King and a new journey begins. After the cool-down period is over the considered team’s nomination becomes active in the voting system and they could be picked up once again by the community as a Challenger. If the said team loses again then they will be eliminated from the Challenger Series. Top 8 teams compete not only for the weekly cash prizes and goodies but for the sheer dominance by retaining their top position throughout or for the maximum number of weeks. There are varied scenarios in which the event may proceed and that’s what makes it more interesting. 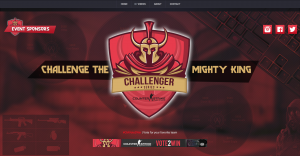 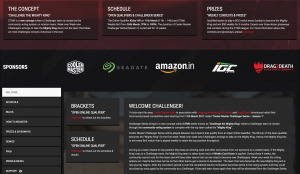 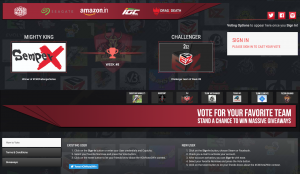